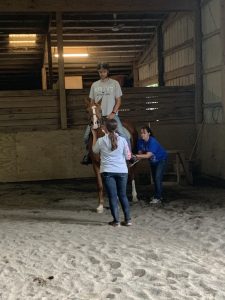 I don’t often work with very, very beginner riders. That sounds snobby, and I don’t mean it to; I don’t have lesson horses, and the folks who seek me out for lessons with their own horses tend to have at least a few years of riding under their belt before they want a specialized dressage lesson.

A few years ago, my fiancé’s kids, then 9 and 11, took their first riding lessons, at a Pony Club Riding Center near me: Misty Brae Farm. Tori Hutcheson, the owner and trainer, has ridden with me before, and she’s produced countless competent young horse people across the English disciplines. (A side note: Pony Club is awesome because it makes kids not only learn to ride but also learn how to care for their animals and take that horsemanship seriously. If you have a kid in your life who rides, they need to be in Pony Club.)

I’d not seen someone’s first riding lesson before. It was fascinating, watching these kiddos just climb right on, brave as anything. It was really interesting to watch their instincts, some of them good (correcting their own balance to keep themselves in the middle of the horse), some of them not (gripping with their legs, drawing the heels up when they felt insecure). Tori and Megan De Michele, her daughter, who also teaches, quietly fixed each flaw and set the kids to riding, walking and even some trotting, posting and steering. In one lesson, they learned a ton.

But kids tend to be brave. They’re little; their bodies don’t hurt; they don’t have preconceived notions of their own mortality. Many of my own students took their first riding lessons as adults, and I knew, conceptually, that that was an impressive thing. But I’d never witnessed it.

And then this year, my fiancé, Ravi Perisastry, said he was going to take a riding lesson.