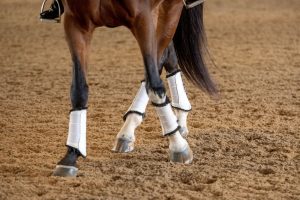 For those who’ve never been, south Florida is… gross. It’s warm and soggy all the time, there’s a lot of microbes in the soil, and land is a gajillion dollars so turnout is small and sandy. It’s a recipe for some challenges with my horses’ skin, and leg skin in general, being close to the ground, and often wearing boots while sweating. But ten winters down here has given me some tools. Here are my favorites right now.

1. A neoprene boot for working. I have been working with Veredus for many years, since Ellegria – who had the market cornered on weird leg and skin issues – went in the old Piaffe Evo boots successfully. They have a new dressage boot I’m eager to meet, but I work my guys in their TRC Vento Sport boots. (A note – I use them backwards, because they’re double Velcroed, and I prefer that the Velcro that pulls the boot snug goes from front to back, not back to front, which is how the boots are made.)

Why neoprene? They’re easy to CLEAN. I just hose them off after each ride, blasting them with the most powerful setting on my hose, and hang to dry. It gets the sand and the ick out, so it can’t linger and potentially grind up my horses’ skin when they work, like a fleece lined boot can.

2. Clean and dry. Good general policy, of course, but particularly in a tough climate, the leg has to be clean, and it has to be dry. I curry legs as part of the normal grooming process, and then once they’ve worked, they get hosed off, shampooed if need be, and then DRIED with a towel. If they’ve got a skin thing rolling, I really like Zephyr’s Garden’s Leave It Be shampoo, or if it’s really fungusy, a mixture of two different human acne products, one with Salicylic Acid, one with Benzoyl Peroxide. Make sure neither has anything scrubby in it like a microbead to further aggravate skin.

And dry, dry, dry. If I have a horse who goes in standing wraps (more on that in a moment!), I’ll apply baby powder to the leg before they get wrapped, to make sure that sucker is REALLY dry under the wraps.

3. Standing wraps from Winderen. I got sent some fun Winderen goodies to try, and was impressed by the quality of all, but I was SUUUUUPER impressed by their standing wrap. I was skeptical – everyone thinks they’ve built a better mousetrap, right? – but these guys really are quite cool. First, they’re thermoregulative, like products from other companies with ceramic fiber technology that we really like, but find to be either too poofy to be easy to wrap, or come in an “easy boot” that is easy, but doesn’t hold up to daily use.

They’ve also got a silver lining, and silver is anti microbial. Super happy news for Florida’s general funk level. And lastly, they’ve got a slightly slippery exterior, which means its easy for shavings to slide off them, rather than stick.

Puck, who is both giant and white legged, tends to get stocky when he doesn’t get turned out overnight (i.e. all winter long in Florida), so he lives in wraps overnight. I’ve had a pair of Quick Wraps from Back On Track for a while, and he just beats the crap out of them; we’ve gone through several pairs (and it’s not just Puck being a menace – other horses in my life have experienced the same thing). So the Winderen ones came, and while admittedly they were quite poofy on the first use, they quickly deflated to be manageable, and I’m hella impressed. They don’t slide around, they don’t get as dirty (and Puck is a pigpen, so that’s something), and I really do think that they keep his legs less stocky than the Back On Track product.

So there it is: clean, dry, and good support products. And of course, veterinary care if you have a real issue. But we’ve been able to keep most of the creepy cruddies at bay with a good grooming protocol, and the right gear for the job!