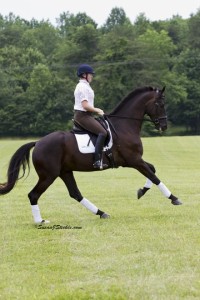 A few neat training metaphors I’ve either made up myself or shamelessly stolen from others. If I could draw, I’d draw these, but I can’t, so instead you get my words. Enjoy.

– a horse’s body is like a garden hose, with the power coming from the spigot that is the horse’s hind legs. Through training, the horse develops an increasingly sophisticated nozzle at the front that allows for the release of energy – water. A green horse just has a simple pressure nozzle at the front, with only one functionality; by the time a horse is a Grand Prix horse, he has a cone function, a jet function, a shower function, a mist function… you get it. But a fancy nozzle can’t make up for a horse who isn’t totally through, because that’s like a hole in the hose; it doesn’t matter how many cool functions there are for the release of energy if the water is sneaking out the middle of the hose.

– a horse should hold his head and neck like he’s peering off a cliff. He should arch his neck and back up and out, so he can see, but still keep his mass leaning a bit backwards, so he doesn’t fall on the forehand and out over the cliff.

– riding the piaffe should feel like you’re in a hallway full of doors, and there’s a stranger walking towards you. If all the doors are closed, your anxiety level goes up, because if the stranger means trouble, you have no way to flee. But if the doors are open, you’ve got an escape route, even if you don’t need it.

– the lower leg, ankle and spur on a trained horse don’t mean go; they means lift. So your lower leg wraps around him like Spanx, and draws his belly into his spine.

– a downward transition is like downshifting a manual transmission car. Just as you keep your foot on the accelerator, so you can go forward as soon as you shift gears, you should keep driving your horse forward even as you drop a gait. Going down gaits doesn’t mean slowing down; the gait should still think forward.

Like Snippets? Sign up for the Sprieser Sporthorse Elite Club, where you’ll get even more monthly goodies, training tips, and a peek behind the scenes in the development of horses from foal to FEI. Click to learn more!

Previous
Next
Go to Top