Out Standing In His Field 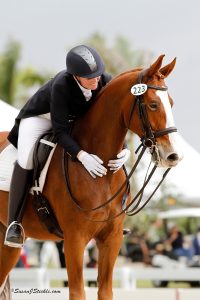 I was 19 or 20 years old, working summers for my childhood trainer outside Chicago. He’d been sent this shrimpy little three year old KWPN Harness-type stallion, cheeky as hell, lightly broke, and very, very spooky. I had to lead him with a whip, not because I was afraid of him, but because he wanted to balk and hide behind me as he walked. We restarted him, and then I had to have someone in the arena with a lunge whip for a while, because he’d suck back so badly about the corners of the indoor that I couldn’t make him go without assistance. He was a nuisance in the gelding field, constantly pestering the big draft cross – appropriately named Thunder – who had heretofore quietly run the herd with benevolence and grace, and instead had to contend, daily, with this annoying little Midge of a Dutch Horse… which led to his nickname. And when I went back to college in the fall, I didn’t give him a second thought.

Over the winter, the breeder – his owner – passed away, and my mother, apparently looking for a way to punish me, bought him (with no pre purchase exam, by the way), and declared him my college graduation project. I rolled my eyes and said fine, geld him, and I’ll deal with the madness when I come home in the Spring.

Gelding improved things. So did turning four. He grew to the towering height of 16h, and become actually very pleasant. I taught lessons on him. I jumped him over tiny things. I won things at horse shows. I left him in Illinois to grow up while I was a working student for Carol Lavell, and I figured I’d pick him back up in the Spring of his five year old year, do a few more shows, and sell him.

That was a nice thought I had. But at five, Midge – real name Victorious – became an absolute monster. No longer balky but still definitely spooky, I had to put him in the double bridle because, even though he was still maybe only 16.1 and I’m a big, strong lass, I could not stop him. He was strong as an ox, hot as hell, and couldn’t maintain an uphill balance at the canter unless he was going at warp speed. Famous people told me to get rid of him, so I put him on the market, and somehow, someone was just crazy enough to vet him. It was then that we discovered a chip in the right stifle, and so they passed. I went to my mom and said well, we’re stuck with him now, so I guess I’ll have to train him.

He was an extremely quick study, thank God. Midge learned his changes in a minute, and half steps about a minute after that. But he was so, so hot to the leg. I would tell people along the way that I put my leg on at the mounting block and took it off when he turned 10. And he was, much to my dismay, incredibly balanced on his hind legs. He could stand up and stay there, like something out of the Spanish Riding School, for as long as he chose, and I’d just sit up there and wait for him to land.

I was young and brave and I stuck it out. He showed Third Level. He showed Prix St. Georges. Along the way, his wagon horse roots kept his knees and hocks bending, but he learned how to canter, learned how to really piaffe (without a whip, by the way – if you tried to carry one, you’d die.) He got eliminated once at Prix St. Georges because he stood up for so long that the judge feared for my life. Another time a judge told me that it was time for me to stop riding rogues and try and ride nice horses for a change. But by then I was smitten, and you couldn’t have pried him out of my hands with a crowbar. I rode him bareback in the snow. I took him swimming in the pond. He was the pony I’d never had as a kid – stubborn like a pony, aggravating like a pony, but utterly my pony.

He made his Grand Prix debut at 10, including a ticket to the first ever Developing Grand Prix Championships. He learned to make extended trot. His piaffe and passage were phenomenal, and the entire canter tour was all 7.5 or better, every time. An Olympian approached me to ask if he was for sale. The president of the 2012 Olympics ground jury said he was in love. At 11, in the early days of the Adequan Global Dressage Festival, Midge won an open Grand Prix class in the international arena in front of the 5* judging panel, beating a class of team riders. And two days later, he just wasn’t quite right. We chased it around for 2 years – first lame behind, then in front, problem after problem. I couldn’t do it anymore – the heartache, the time, the money. I sent him to the retirement field, with the idea that I’d look at him again in six months, but I figured he was done.

But Midge was not done. He came out of the field remarkably sound. And at the same time, a student named Liza came to the end of a bad string of her own horse luck, with two horses suffering from career-ending health conditions. Horseless, and one 3rd Level score away from her USDF Bronze Medal, I made her a deal: take Midge. If he breaks, no worries, he can go back to the field. As long as he stays sound, he’s yours.

Liza’s care and ministrations were meticulous. He came back, and while he was still hot and feral, time had mellowed him to the point of being vaguely dependable. They showed Third Level. She earned her Bronze, and he still looked good, so we said hey, let’s try Fourth. Then Prix St. Georges. Her USDF Silver Medal. He was still holding steady, so I sold him to Liza – for $1. Then they showed Intermediate II. Then Grand Prix, and her Gold Medal. Maybe we should be done, we thought.

But Midge was not yet done. COVID caused us to hit pause on competing him in 2020, but he continued to teach his family, and tortured more than one working student into tears as they tried to just do simple, low level work. He did Grand Prix demos, and became internet famous for a few one handed stupid pet tricks. This summer, at the age of 19, he took one of my employees around at Grand Prix as well. And only then did he start to show his age. There was a spot of not-quite-right behind that we could have gone on medical safari to treat, but with nothing left for him to give (and also because the little stinker was such a menace to the lower level girls), his amazing owner decided instead to send him back to the retirement field, this time for good.

Naturally, he bucked and squealed his way around his last few weeks with us, and then bronc’d his way around the field, stirring up the other senior citizens. But to the end of his time as a riding horse, he bore the look of eagles. And I’m so grateful for all of the amazing people who have provided loving homes for the horses I’ve brought up the levels, but the decision to retire, such a hard one already, is so much better made 6 months or 9 months or 12 months too early than five minutes too late.

Cheers, Midge. You, eventually, kicking and screaming, made believers out of everyone you met. Enjoy your golden years being your naughty pony self. 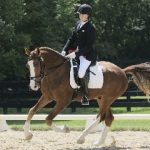 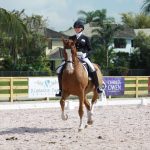 Midge eventually made believers out of major judges and trainers. 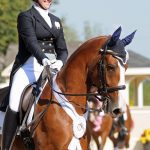 Even on an international scale. 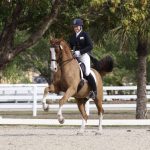 But he was tremendously fun. 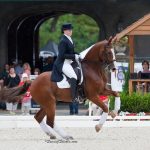 …Midge gave so much to so many. 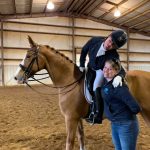 He gave two riders their Grand Prix scores for their USDF Gold Medals, and taught many more about connection and feel.