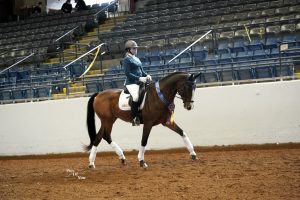 Hey, guess what? It’s been a weird year. Shocking, I know.

I had a plan—getting Elvis to the U.S. Dressage Festival of Champions—only to have it rerouted by COVID-19, amongst other things. But I also had a few plans for the other horses in my life: trying to qualify as many as possible for the USDF Finals. And then those were canceled.

I must confess that I did not shed a tear for the USDF Finals. For sure it’s one of my favorite shows, run by a crack team and with a very “Big Deal” feeling. I’ll miss not being there, but not nearly as much as I’d be anxious and scared, knowing it wasn’t fair when so many couldn’t be there, knowing what a dangerous and irresponsible proposition such a big gathering of people, largely indoors, from all over the country, would be.

And not for nothing, but being done a month earlier wasn’t breaking my heart. Every horse in my life is developing, not finished. I want to see them rise to their potential, and I want to do it smart, letting my horses have downtime when I can. So being done competitively by mid-October instead of mid-November? A silver lining I’m perfectly happy with.

So it meant that the Region 1 Championships were our year-ender. I’d qualified Puck (Gretzky RV) for the third level championships and Patrick—Terrina Baker’s De Angelicus MTF—for the first level championships when we were in Florida. Helio earned his fourth level and Prix St. Georges qualifying scores over the summer. And off we went.